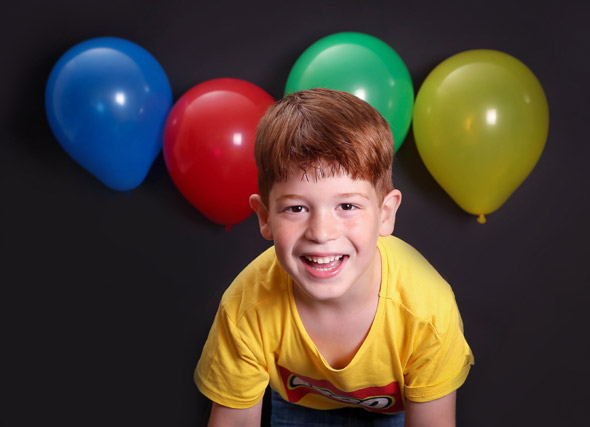 Hein-Chris was born early in January 2013 and quickly exhibited signs of being different – more sensitive, more unsettled, generally more unhappy – than his peers. He would cry for hours on end, have a quick, unsettled sleep, and then continue crying. This was the routine for at least the first four months of his life. Taking him out of the house was a huge production. I needed two fully packed bags of clothes and wet wipes as he would scream to the point that he would vomit all over himself, multiple times, during every outing.

However, I did not let this stop me from taking Hein-Chris to Toptots and a range of other venues. I instinctively knew that keeping him safely ensconced in a darkened room might provide short-term relief, but that this – in the long-run – would be detrimental to his development. I sensed that I would always have to push his boundaries, very gently. Hein-Chris typically spent the first twenty minutes of every Toptots class outside until he was settled enough to join the rest of his friends – every week for almost two years. No exceptions.

There was clearly a huge difference between Hein-Chris and his Toptots friends, and – after liaising with his Toptots instructor – I sought professional advice. Hein-Chris visited his paediatrician, a neurodevelopmental paediatrician and an occupational therapist, and shortly after his second birthday he was diagnosed with Sensory Processing Disorder (SPD).

SPD (with specific reference to sensory defensiveness or avoidance) is the brain’s inability to make sense of the input it is receiving from the outside world from inside the body. These inputs are received via the body’s five senses as well as its vestibular system and body position. For a child with SPD most inputs received are perceived as a threat – by default. Sights, sounds, movements, smells, touches, etc. all represent immediate and imminent danger. The child with SPD is in an almost constant state of heightened anxiety (heightened blood pressure, pulse rate and increased levels of adrenalin). The brain is telling the body to panic. SPD cannot be cured, but the child can be taught to cope with it appropriately. If he/she is not treated and taught, a life-long battle with anxiety disorder and depression is likely.

Inadvertently Hein-Chris had been exposed to all manner of sensory inputs through attendance of Toptots classes and others long before his diagnosis. He had literally been getting used to the vast, scary world since he was eight weeks old, and that certainly gave him a solid start to learning how to cope with SPD and the associated anxiety.

The following is a short overview of my preferred list of interventions to help curb that anxiety.

Brushing: Speak to an OT about brushing the body of the child with SPD. While brushing is indicated for the treatment of tactile defensiveness, it is also incredibly effective at treating SPD overall.

Baby bottles: Sucking a dummy or baby bottle is extremely relaxing to the child with SPD. While Hein-Chris was weaned off his dummy at age three (due to the affect it might have had on his teeth and speech), he is still offered a baby bottle (usually filled with fresh milk or water; definitely no juice) when he becomes particularly anxious – (and he is six now). It calms him right down – almost instantaneously.

Weighted blankets: These are another great tool for relieving the stresses of the day. The blankets offer deep, relaxing pressure. When I first started using these blankets on Hein-Chris, I would wait until he was asleep before placing it over his legs, and – later – over his entire body (not his head). He could not tolerate the blanket while he was awake, but introducing it in his sleep, worked well for him.

Keep outings short, but frequent: Mommies must watch their children closely during outings. Once it is noticed that the child is heading for a panic attack or meltdown, she needs to vacate immediately. Attempting to settle the child there and then will not work. Return home or to any other familiar space the child feels safe. Outings highly recommended are:

Home-made social stories work miracles: What is a social story? It is a short, five to ten-page story introducing a new event/experience/situation to the child. Hein-Chris’ social stories always take the same form: Five to ten A4 pages with different photos stuck to the top of each page, and a sentence at the bottom explaining the photo. For instance, if Hein-Chris changed schools, there would be a photo of the school building, another of the playground, and others of the principal, the teacher, and the new classroom door. Under each photo I would add a different sentence. “This is Hein-Chris’ new school. It is called Umhlali Prep”. “Hein-Chris has a lovely new teacher called Mrs Wilson”. “Mommy will fetch Hein-Chris everyday right after story time”. Read it twice daily for as long as necessary.

Daily routines: There is little that soothes a child with SPD more than sticking to a basic routine. However, never allow the routine to become so rigid that the child is unwilling to accept planned changes to the routine. Tell the child, every night, exactly what he/she can expect in terms of the schedule for the next day – the things typically done daily as well as a variety of variations to the routine. No two weeks should ever look the same exactly.

Swimming: Hein-Chris started swimming lessons at a very early age (well before he turned one). The first four years of trying to get this little boy used to the water, was an horrendous ordeal for him. He screamed and had violent tantrums on many occasions. We would vacate as soon as possible when this occurred but would be back the next week to face the same music. In the last two years, Hein-Chris has blossomed into a confident swimmer who thoroughly enjoys water, and it is a brilliant anxiety reducer for him.

No force feeding: While you might be able to convince/bribe/force/coax a neurotypical child to eat a variety of foods, the child with SPD will not be swayed. In most cases they simply cannot tolerate the smell, taste and texture of the food, making it physically impossible to consume. It is not an act. Do not force your child to eat. If I felt that Hein-Chris was over- or under-weight, I would take him to visit his paediatrician without delay. The same course of action would apply if Hein-Chris:

Muted scent: It is best for a new mommy to smell as close to her natural self as possible when cuddling and loving her new-born. Take note of the smell of the perfume you are wearing, and the body lotion, bath soap, talcum powder, antiperspirant, etc. These odours can be over-whelming to a new-born, and if that new-born so happens to have SPD, you cannot begin to imagine the discomfort. ​

Today Hein-Chris lives happily with his 2 younger siblings, Ruben (born in 2014) and Ben-Louie (born in 2016), and his doting parents in Ballito. He attends a mainstream school – despite all signs to the contrary at a younger age – and is considered a polite, well-adjusted pre-schooler.

Hein-Chris has journeyed a world away from his infant self. He has worked very hard, every day, every week to be able to engage with a world that is filled with sight, sound, smell, touch, taste and movement. He is a warrior against SPD, and I am the provider of whatsoever reinforcement he needs.

Previous Post
Process Art and Early Childhood Development
Next Post
How early is too early when it comes to your baby’s learning?