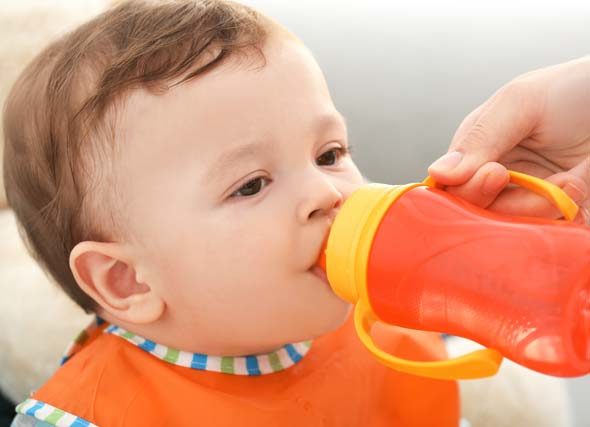 During the first year of life, a baby primarily uses a propelling motion, referred to as the infant suck-swallow pattern.  At around a year old, babies should develop a more mature swallow pattern, which will probably be delayed by the use of a sippy cup.  A bottle teat or sippy spout rests over the front third of the tongue, preventing the essential elevation of the tongue, which is necessary for being an effective and efficient eater.  When toddlers continue to use the infant swallow pattern, chewing and swallowing new foods can be very difficult and messy. Picky or fussy eaters are formed and parents wonder, “Why won’t my child chew and bite new/textured foods?” Persisting “paci-mouth” could be the answer.

When a tongue cannot elevate, it tends to rest forward in the mouth, often referred to as “paci-mouth”. This forward resting posture is seen in children who continue to use a pacifier/sippy cup for a longer period than necessary, and impedes speech development.  Speech sounds which require lingual elevation are usually delayed, such as the t, d, l, r and s sounds. When a child uses the premature ‘suck-swallow” pattern past a year of age, speech skills cannot advance to match age appropriateness due to tongue placement.  Often a lisp is heard amongst many other articulation errors.

A forward and low tongue placement also encourages a lower jaw posture, which often leads to mouth breathing. Mouth breathing has been linked to behavioral problems, facial and dental abnormalities, and even slower child growth.

Straw drinking promotes good jaw and facial muscle movement and allows for lingual elevation.  Normal cup drinking is the ultimate goal, as it promotes best oral development. You can start off with straw and normal cup drinking as early as 6 months old using water, and should transition from a milk bottle to a straw cup for milk from 12 months of age. That said, the occasional or infrequent use of a sippy cup may not interfere with age-appropriate oral development, but children who do use them seem to have sippy cups with them most of the day as a soother. Not every child who uses a sippy cup will have speech problems, but it would be in your child’s best interest for you to opt for a pop-up (soft) straw cup instead.