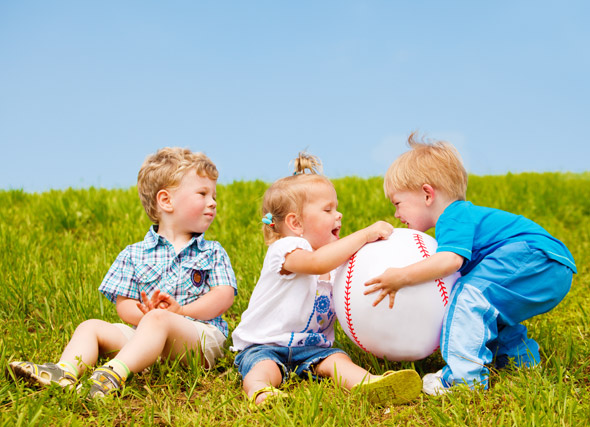 Just because a purple dinosaur says so doesn’t mean it’s going to happen no matter how many times we repeat this. Sharing is just not in their vocabulary when they are 2 years old.

To the toddler there is no yours, mine and ours. It’s all mine! He is only just learning that things belong to people but has not grasped that others may also have ownership of certain items. They label everything as mine. My mommy, my teddy, my bed, my chair but also things that belong to others, like mom’s keys and dad’s phone or the slide at Toptots. Mine is his favourite word.

This does not mean that he is doomed to being selfish, grabbing what belongs to others. He is learning to stand up for his rights. This is not only normal but essential in the road to learning to share. You must remember that his world revolves around him so owning comes long before sharing. He will offer mom a bite of his biscuit or give his teddy to his sister that’s crying to console her. This is more empathy then actual sharing.

Toddlers don’t understand yet that the friend who is playing with his toy will leave it behind when he goes home. If he gets to the slide first it’s his and that’s why he pushes the other child to the floor who tries to take a turn on the slide. This is very normal.

It’s only towards the age of three or four that sharing becomes easier. It’s natural for your toddler not to share but I know you want him to so let’s look at how we can help make it happen.

So even if Barney says sharing is caring, don’t expect your toddler to master this without lots of love and support from you..

Previous Post
Why puzzles are so important for stimulating young minds.
Next Post
Why is reading to your child so important?