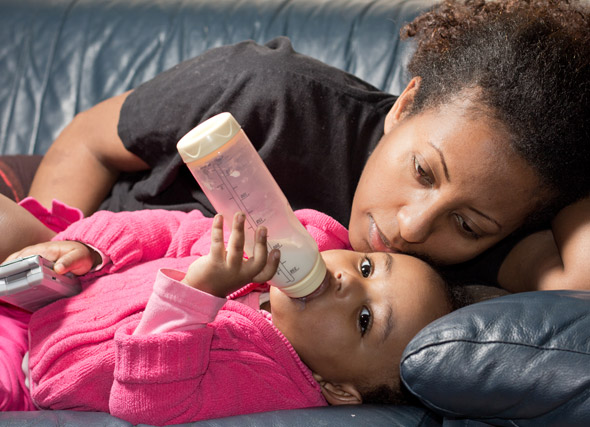 A common sleep problem in the toddler years is the fact that you are still getting up a few times each night to fulfill your little sprogs demands for endless bottles of milk or juice. Should you refuse to offer this feed to your toddler, all hell breaks loose, and because you are so tired and worn out (not having had a good night’s sleep for a while), you give in because that is the easy option to ensure peace and quiet!

Rest assured, toddlers do not need any nutrition during the night (unless he is ill), regardless of how badly they have eaten in the day – in fact, the most common reason for poor eating habits in toddlers is because they drink all night long thus obtaining inappropriate calories! Your toddler will also have many teeth by now, so think about teeth decay from milk pooling in his mouth all night long. Now that your toddler is older and you can communicate with him, the good news is that you can discuss and negotiate with him why he can’t have a bottle during the night.

To start with, know that your toddler only needs in the region of 400 ml milk per day, and this can include milk in food such as yogurt and cheese. A good habit to get into is to offer him his milk feeds just twice a day, once on waking in the morning, and again at bedtime in the evening. All other fluid during the day should be in the form of water, diluted fruit juice or rooibos tea, given from a sippy cup or straw. This is a good start to wean your toddler completely off his bottle, which generally occurs around the age of 3. If your child is underweight or recovering from illness and needs some catch up growth, it is a good idea to give a specialized nutritional supplement milk such as Pediasure Complete at bedtime in place of his milk. This will ensure that he is getting quality nutrition at bedtime, and allay any fears you may have of him needing milk feeds during the night.

Take your toddler on an outing to buy him a special night-time cup / sippy cup. As part of the bedtime ritual allow him to fill it with water and place it next to his bed. Tell him before he goes to sleep that there will be no bottles during the night (the milkman has gone home and will only be back in the morning) and that if he is thirsty, he has his water to sip on. When he wakes in the middle of the night insisting on a bottle of milk / juice, follow these simple steps: